Back in December, we marked International Day of Disabled People with a celebratory showcase called SHINE.

Highlighting a selection of just some of the creative, disabled talent from across our region.

It has been curated by:

Ruth Patterson – lead singer with Holy Moly and the Crackers, Attitude is Everything ambassador and Alphabetti Trustee.

Kicking us off, Bogsey explains what SHINE is all about: 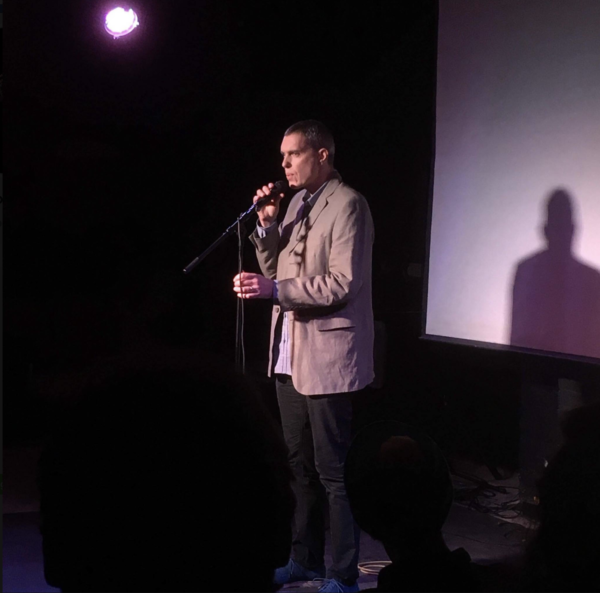 Bogsey is a blind spoken word artist, writer and playwright from Newcastle. He is a winner of The Word poetry slam, The Great Gateshead Slam and The Great North Slam. His play ‘Hearing Voices’ was a winner of Alphabetti Theatre’s ‘Listen Up’ short audio drama competition and is due for release early in 2021. 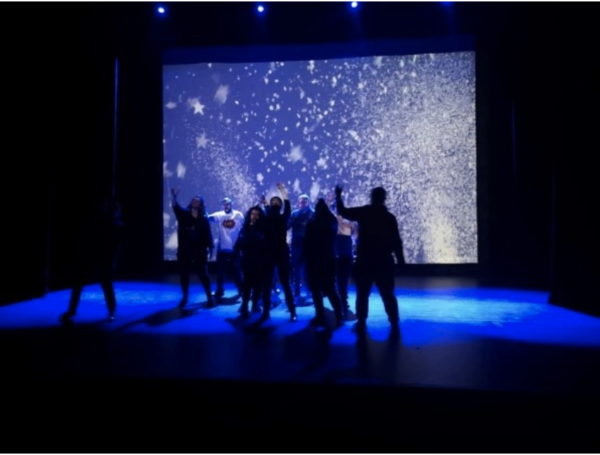 This is a link to ‘In The Middle Of Our Street’ which toured regionally and was programmed live in the Catalyst Awards Ceremony 2019, Come On Down Festival 2019 and also at this year’s online SIRF at Home Festival 2020.

Full Circle is an award-winning company of learning-disabled theatre makers based in the Tees Valley. They are an associate company of ARC Stockton and work alongside long-term artistic collaborators Little Cog, with Artistic Director Vici Wreford-Sinnott. The company are known for non-verbal, visually striking work with amazing music scores. Their work reflects the experiences of learning-disabled people in powerful, joyous and thought-provoking ways. 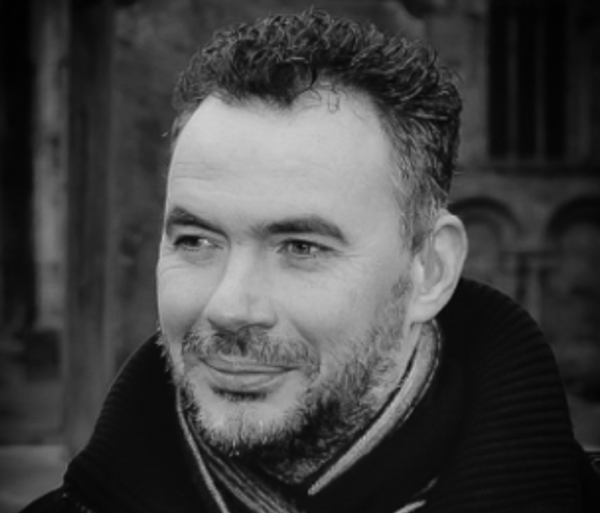 ‘Alexander on the Train’ is a short animation based on Paul’s experiences of Fatherhood. The story is based on a train journey that Paul often takes with his son Alexander, to Berwick upon Tweed. Commissioned by Surface Area Dance Theatre with thanks to the National Lottery Community Support Fund.

Paul’s style of animation includes lots of simple, clean and bright colours. One of his favourite parts of ‘Alexander on the Train’ is the autumn scenes which include falling brown and yellow leaves, that are different to the animated seascapes that look very cold and use lots of blue colours and tones.

Paul Miller is the Director of Rory’s Studio, as a Deaf, British Sign Language user, Paul strives to illuminate Deaf Culture within mainstream forums. In 2015, Paul was appointed a Director of Surface Area Dance Theatre and is currently working to produce ‘Signed, Sealed, Delivered, I’m Yours’, set to take place at Dance City in March 2021.

Alexander on Train by Paul Miller 2020 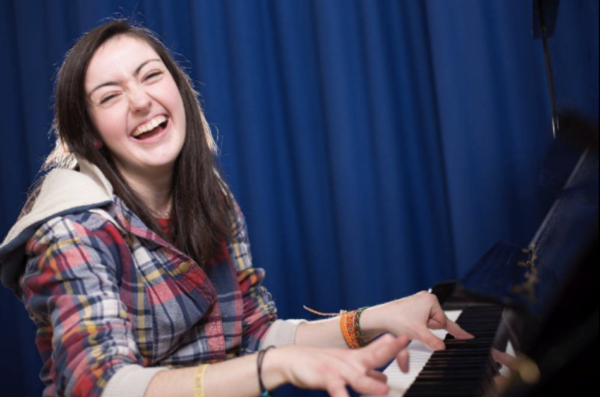 Sarah Fisher is a percussionist and pianist based in Gateshead.

Sarah has Cerebral Palsy and a hyperkinetic movement disorder which affects her left side and speech.

Sarah works as a music facilitator, teaching people of all ages and abilities. Including; Sage Gateshead’s Community Music Spark Programme where she worked with young people with additional needs.

Sarah is a member of the Pandemonium Drummers, the volunteer drummers from the London 2012 Olympic Opening Ceremony, who have performed at the UEFA Championship Final 2013 at Wembley and are a frequent act at the Lord Mayor’s New Year’s Day Parade in London. In March 2017, she developed her own show -‘Twitch’- which combined music, disability and humour to showcase her developing artistic identity as a musician with a disability. 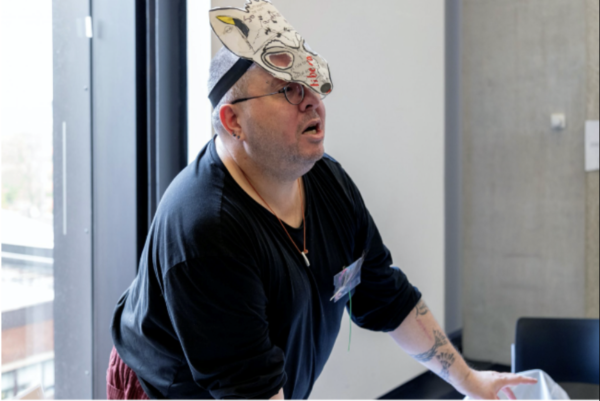 we are part of disconsortia – regional disabled artists collective and sound & visuals have just been commissioned by them. other sound art has been commissioned (inc Alma Zevi Venice, Arts & Heritage, The Auxilliary Teesside), broadcast (inc Radiophrenia), exhibited all over (e.g. Art of Protest, Bethlem Gallery).  we’ve created music theatre for sage gateshead and for GIFT festival and received two awards from sound & music.

​these words are sung:

poppies aint binary, poppies are many

afon wysyg (river usk) plus sounds from its environment including, birds, footsteps, bells, us – mostly natural, some electronically processed. the work is long and slow, following the flow of the river, the chatter of birds, the crunch of footsteps, the mood is gentle. water has historically been seen as a place of peace for those ov us who are mad (more accurately driven mad by the world), all water stills us mentally and also stills our worsening tinnitus – something in common with many other folks with tinnitus. this piece is about finding peace. 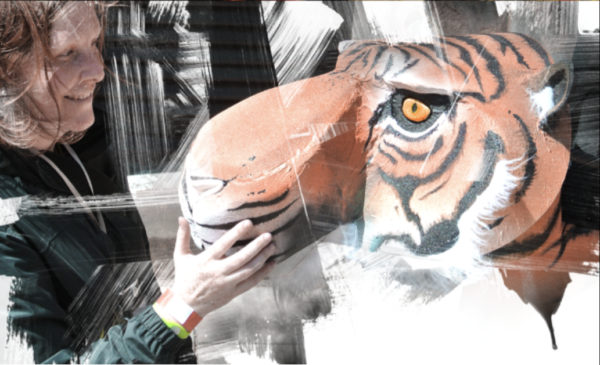 This audio described and captioned film was made with a Disconsortia At the Table commission. Audio described by Vici Wreford-Sinnott. The first 1.30 minutes of this film are sound only, an audio description to set the scene to come.

Established in 2003 Greener Lavelle is the business name for Designer/Maker Kim McDermottroe.

Since establishing the business in 2003, Greener Lavelle has worked on many large-scale carnival structures at flagship events across the North East. Her studies at Cleveland College of Art in “Entertainment Design Crafts – with a specialism, in Costume” gave her a solid background in technique and allowed her to take on costume design commissions from museums and galleries, independent films and theatrical productions. 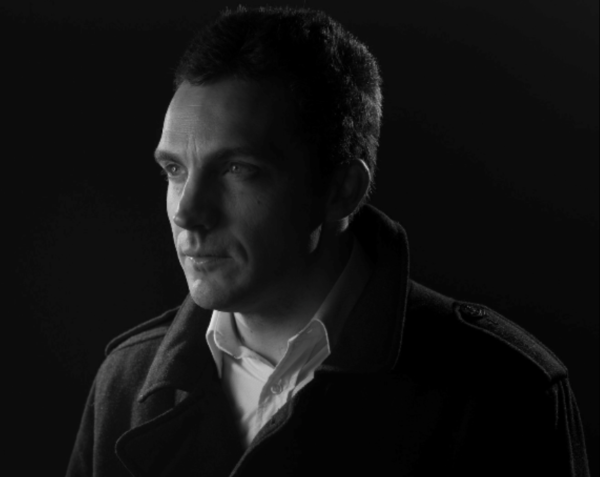 Simon Taylor is a singer-songwriter from Newcastle upon Tyne. His music combines elements of Latin, funk and rock with musical influences ranging from Lou Reed to Serge Gainsbourg. Having studied classical guitar initially, Simon began writing songs that reflected his love of Latin culture as well as occasionally exploring his own experiences of mental health.

Following a headline performance at the O2 Academy Newcastle in 2018, Simon began recording a series of new songs at home with assistance from the producer Adam Forster and his brother and frequent collaborator, drummer Jon Forster. These songs will form the basis of the E.p “Under The Volcano”, which mixes Latin, rock and pop influences. and will be released in early 2021.

The first two singles from this E.p, “Bolero Loco” and “Formentera Dream”, were released in the summer of 2020 with the former receiving a 5-star review in NE Volume Magazine and the latter gaining BBC Introducing In The North East airplay. The third single to be released from this E.p is the Balearic-inspired rock/ electronica track “Ibiza Nights”. This song is available to buy on Bandcamp, Amazon and iTunes now and also to stream on Spotify. 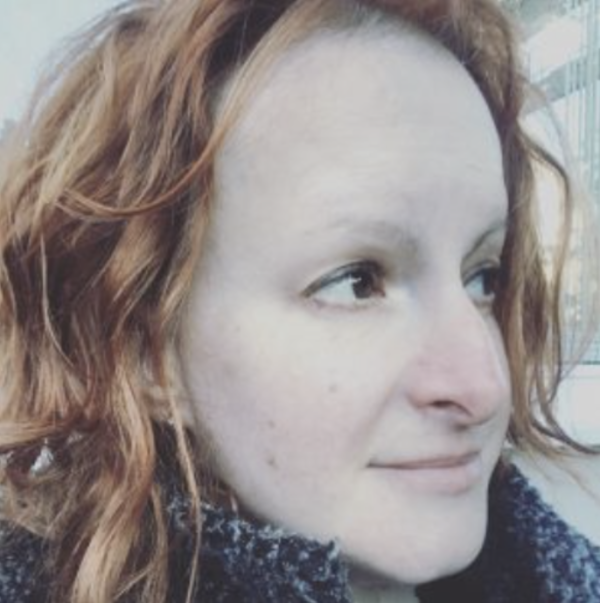 It’s me – Steph, wife, mum and someone with a rare form of dwarfism known as Russell Silver Syndrome. 11p 15, to be precise, is the chromosome responsible for my unique perspective on the world.

Hello Little Lady aims to be a platform to celebrate and give a voice to those of us in the dwarf community. 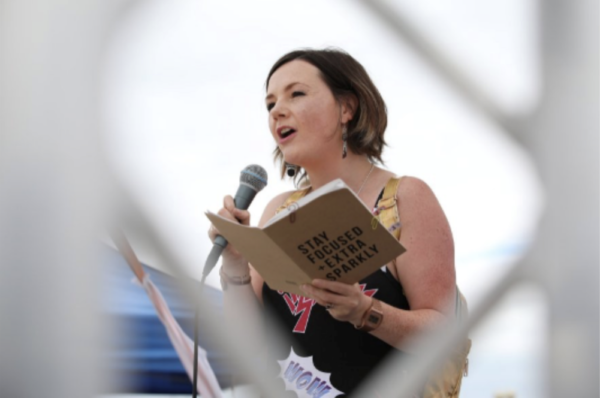 ‘Writing the Missing – A River Cycle’ 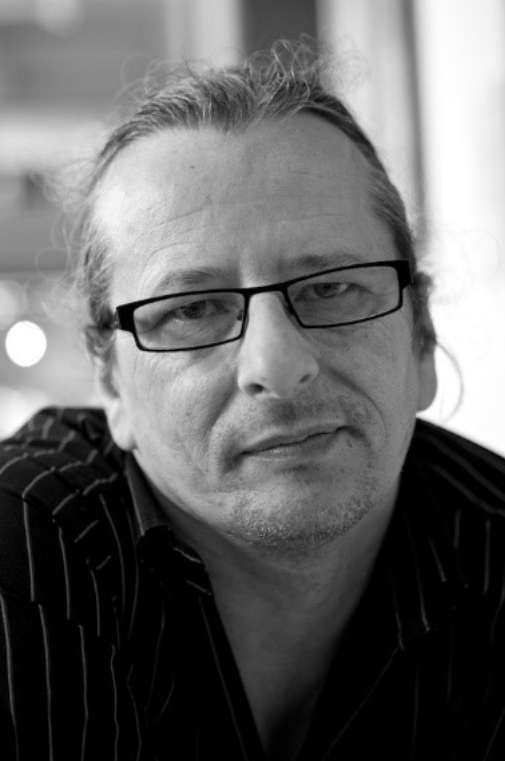 Kev Howard is a disabled artist, activist, photographer and musician. Whether dealing with the human body or limbs in the studio, political protests, Arizona deserts or the north east surf community, every sinew, or scar; each contour or depth to landscape, face or body is mapped by his lens and composed like a musical rhythm.

LANDSCAPE OF THE FLESH 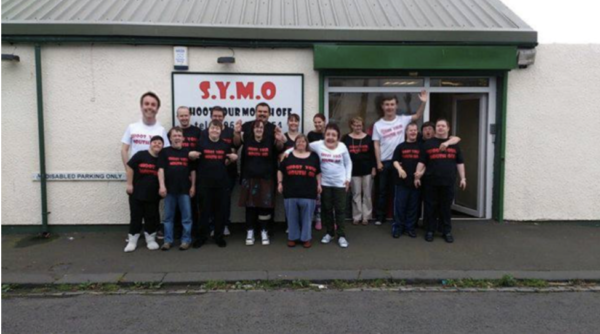 Shoot Your Mouth Off Films 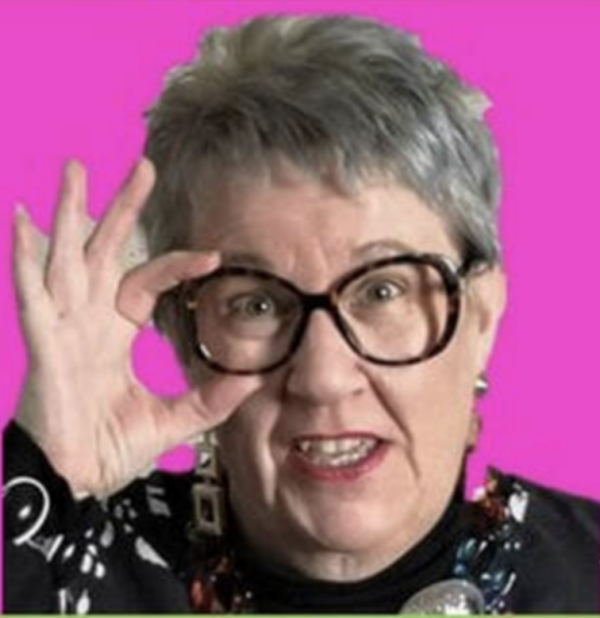 Vici is Artistic Director of Little Cog, writing and touring nationally a number of pieces of work including, Butterfly which was named Best One Person Play by the British Theatre Guide, Another England, Lighthouse and her recent commissions The Wrong Woman Discussions and Siege for ARC Stockton and Home Manchester can still be seen online as part of the Homemaker’s commissions. She is a lifelong feminist and activist, regularly speaking and campaigning on disability rights matters and the role of culture and the arts in equality. She is a founding member of both Disconsortia and We Shall Not Be Removed.

An artist of intense honesty, singer and composer Ruth Patterson bares her soul with courage, conviction and vulnerability. Growing up in the moorlands of North Yorkshire, Ruth inherited a romantic melancholia equally from the land and from the music of such pioneering pop dreamers as Kate Bush and Nick Drake. Ruth released “I’d Give It All” in late 2019 and two subsequent singles in 2020, receiving airplay from 6 Music and Radio X. She has just been announced as a PRS Foundation Women Make Music fund grantee and is working on her debut E.P.

Ruth Patterson has just completed a year as Sage Gateshead’s Artist-In-Residence as well as being an activist campaigning to improve deaf and disabled people’s access to live music. She has appeared as a panellist at Great Escape, Cambridge Folk Festival, Lost Evenings, Glasgow Jazz Festival and written for NME, M for PRS and BBC highlighting the issues of disabled artists in the music industry. She has also performed and spoken at Liberty Festival and the World Para Athletic Championships.

As well as her work as a solo artist, she has toured extensively, created three acclaimed albums as leader of folk-rock band Holy Moly & the Crackers and has had music featured in Radio, TV, Film and Theatre: most notably as the main end title track of Hollywood blockbuster ‘Ocean’s 8’. 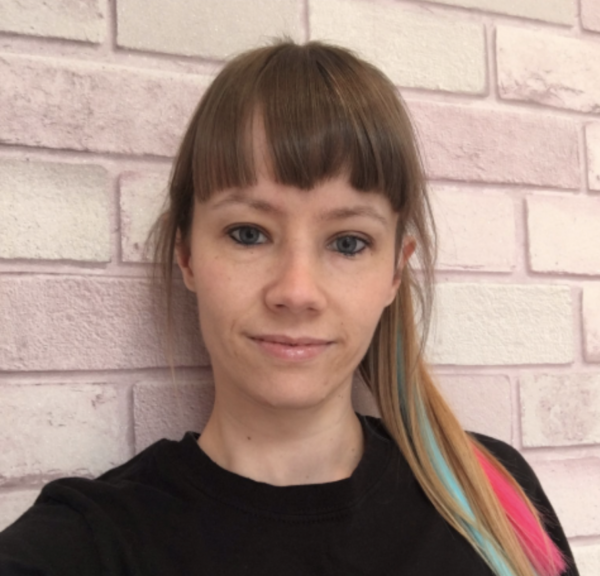 My name is Becki, I am a disabled dance artist and autism advocate based in the North East of England. I work as a leadership coach at Inclusion North.

Hunting for the unicorn is an autism awareness dance piece. The unicorn represents the fact we can’t always see autism but it does not mean it isn’t there. It is about the search inside each of us to find what makes each of us special and unique.

It is a contemporary dance piece. The set is made up of 6 sensory tiles laid across the front of the stage to represent stepping stones.

There is a chair and desk back stage right to represent school days and routine and misunderstanding information. There is a large sequin covered frame in back stage left to represent reflection, how we view ourselves and how we can enter inside ourselves to find out or superpowers, strengths and what makes us special.

Hunting for the Unicorn (highlights) by Becki Parker 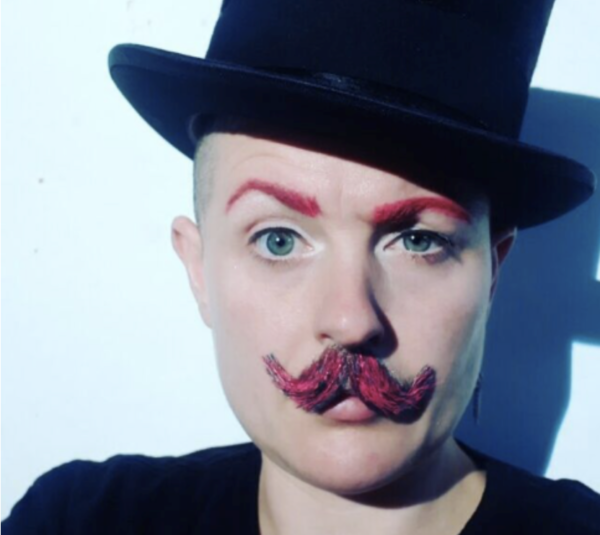 Lady Kitt is a socially engaged maker, researcher & drag king. Their work is driven by insatiable curiosity to explore, share and (gently) insight the social functions of creative stuff.

They use paper sculpting & performance to create environments, interactions and adventures. Things like: “The Archive of Friendship” a live-art library of learning disability culture, “Burned Bright” a giant, collaboratively built paper shrine (which on completion was ceremonially burned), &“WORTH” as series of portraits depicting gender equality activists cut into £50 notes.

Kitt is dyslexic and dyspraxic and was diagnosed with ME in 2009.